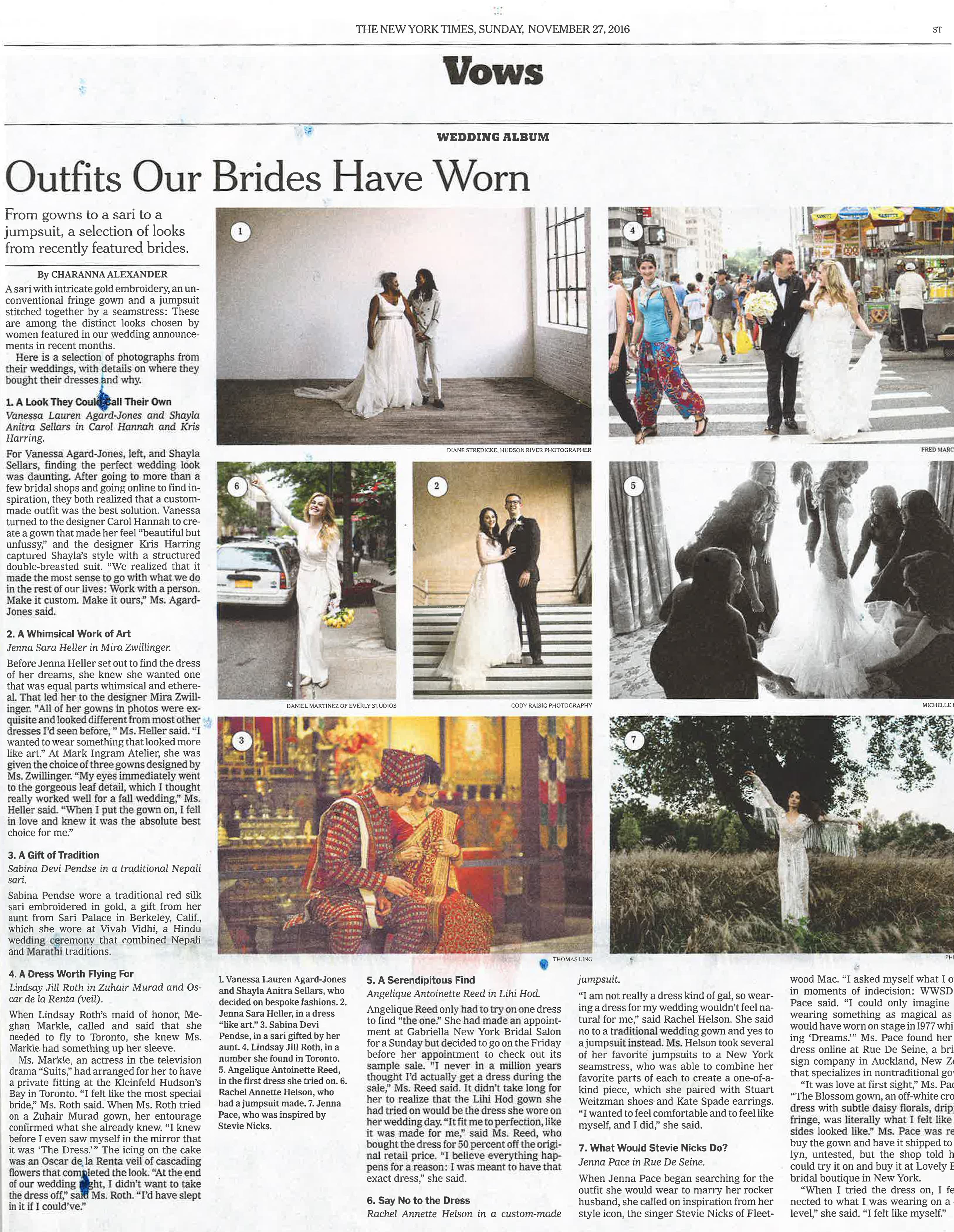 Outfits Our Brides Have Worn

From gowns to a sari to a jumpsuit, a selection of looks from recently featured brides.

A sari with intricate gold embroidery, an unconventional fringe gown and a jumpsuit stitched together by a seamstress: These are among the distinct looks chosen by women featured in our wedding announcements in recent months.
Here is a selection of photographs from where they bought their dresses why.

1. A Look They Could Their Own
Vanessa Lauren Agard-Jones and Shayla Anitra Sellars in Carol Hannah and Kris Harring.
For Vanessa Agard-Jones, left, and Shayla Sellars, finding the perfect wedding look was daunting. After going to more than a few bridal shops and going online to find inspiration, they both realized that a custom-made outfit was the best solution. Vanessa turned to the designer Carol Hannah to create a gown that made her feel "beautiful but unfussy; and the designer Kris Harring captured Shayla's style with a structured double-breasted suit. "We realized that it made the most sense to go with what we do in the rest of our lives: Work with a person. Make it custom. Make it ours:' Ms. Agard-Jones said.

2. A Whimsical Work of Art
Jenna Sara Heller in Mira Zwillinger.
Before Jenna Heller set out to find the dress of her dreams, she knew she wanted one that was equal parts whimsical and ethereal. That led her to the designer Mira Zwillinger. "All of her gowns in photos were exquisite and looked different from most other ... dresses I'd seen before, " Ms. Heller said. "I wanted to wear something that looked more like art." At Mark Ingram Atelier, she was given the choice of three gowns designed by Ms. Zwillinger. ''My eyes immediately went to the gorgeous leaf detail, which I thought really worked well for a fall wedding;• Ms. Heller said. "When I put the gown on, 1 fell in love and knew it was the absolute best choice for me."
3. A Gift of Tradition
Sabina Devi Pendse in a traditional Nepali sari.
Sabina Pendse wore a traditional red silk sari embroidered in gold, a gift from her aunt from Sari Palace in Berkeley, Calif., which she wore at Vivah Vidhi, a Hindu wedding ceremony that combined Nepali and Marathi traditions.

4. A Dress Worth Flying For
Lindsay Jill Roth in Zuhair Murad and Os-car de la Renta (veil).
When Lindsay Roth's maid of honor, Meghan Markle, called and said that she needed to fly to Toronto, she knew Ms. Markle had something up her sleeve.
Ms. Markle, an actress in the television drama "Suits," had arranged for her to have a private fitting at the Kleinfeld Hudson's Bay in Toronto. "I felt like the most special bride;' Ms. Roth said. When Ms. Roth tried on a Zuhair Murad gown, her entourage confirmed what she already knew. "I knew before I even saw myself in the mirror that it was 'The Dress.'" The icing on the cake was an Oscar de la Renta veil of cascading flowers that completed the look.. "At the end of our wedding night, I didn't want to take the dress off," s Ms. Roth. "I'd have slept in it if I could've."

5. A Serendipitous Find
Angelique Antoinette Reed in Lihi Hod.
Angelique Reed only had to try on one dress to find "the one!' She had made an appointment at Gabriella New York Bridal Salon for a Sunday but decided to go on the Friday before her appointment to check out its sample sale. ''1 never in a million years thought I'd actually get a dress during the sale," Ms. Reed said. It didn't take long for her to realize that the Uhi Hod gown she had tried on would be the dress she wore on her wedding day." It fit me to perfection, like it was made for me," said Ms. Reed, who bought the dress for 50 percent off the original retail price. "l believe everything happens for a reason: r was meant to have that
exact dress," she said.

6. Say No to the Dress
Rachel Annette Helson in a custom-made jumpsuit. "I am not really a dress kind of gal, so wearing a dress for my wedding wouldn't feel natural for me," said Rachel Helson. She said no to a traditional wedding gown and yes to a jumpsuit instead. Ms. Helson took several of her favorite jumpsuits to a New York seamstress, who was able to combine her favorite parts of each to create a one-of-a-kind piece, which she paired with Stuart Weitzman shoes and Kate Spade earrings. "I wanted to feel comfortable and to feel like myself, and I did;' she said.

7. What Would Stevie Nicks Do? Jenna Pace in Rue De Seine.
When Jenna Pace began searching for the outfit she would wear to marry her rocker husband, she called on inspiration from her style icon, the singer Stevie Nicks of Fleetwood Mac. "I asked myself what I o in moments of indecision: WWSD Pace said. "I could only imagine wearing something as magical as would have worn on stage in 1977 whiting 'Dreams."' Ms. Pace found her dress online at Rue De Seine, a bri sign company in Auckland, New z, that specializes in nontraditional go• "It was love at first sight," Ms. Pac "The Blossom gown, an off-white cro dress with subtle daisy florals, drip; fringe, was literally what I felt like sides looked like." Ms. Pace was re buy the gown and have it shipped to lyn, untested, but the shop told h could try it on and buy it at Lovely E bridal boutique in New York. "When I tried the dress on, I fe nected to what I was wearing on a level," she said. "I felt like myself.''

We invite you to the beautiful world of Lihi Hod, discover our new collection, events and exclusive offers.

Dive into the beautiful world of Lihi Hod and find the wedding gown that suits you and your dreams.